October 29, 2014
I'm an artist. If you've met me, you know this of me. My preferred medium is my own body. I believe in the primacy of self-determination and that body is the best vessel for activism.

Over a year ago, Courtney and I formed Judy's Revenge to be a creative outlet for our activist ideals. We were exhibitors in the 2013 edition of Nuit Blanche Ottawa-Gatineau and have designed and worn genderfucking attire to bars and events like Promdemonium. Our goal is to embody transformative discourse and then perform that transformative discourse as bodies in relation to other bodies, space, and social media. We break barriers, we break binaries, and we break expectations.

The particular project that moves me to write this post was inspired by a class requirement for my graduate Gender, Creativity, and Confinement course taught by Dr. Sylvie Frigon, Criminologist and Joint Chair in Women's and Gender Studies at Carleton University and the University of Ottawa. The final project for the class requires an artwork be created and presented to the class, as well as an 8-10 page paper explaining my artwork.

I knew from the beginning of the class that I wanted to convey 2 themes: critique of the violent ways prisons enact gender binaries and a critique of prisons themselves.

I wanted to craft an outfit that embodied these thoughts. So I began with bringing a symbol of the prison into the thinking: the orange jumpsuit. I told Courtney about the project, and we agreed to execute it at the Inside/Out Queer Film Festival after party organized by the Queer Mafia at Babylon Nightclub. Courtney and I wanted to wear the exact same outfit as a means to demonstrate gender fluidity.

The makeup we chose was particularly masculine and balanced off our hairstyles, typical for little girls. (And to deal with my sweaty mane of hair at the club) Playing on the "any costume can be sexy" discourse of women's costuming, we cut off the sleeves and pant legs then accessorized with gaudy gems. Courtney wore ill-fitting heels (by accident), and I wore canvass camouflage shoes. We each wore a skeleton hand bracelet too. "Ms. Represented" (Courtney) and "Ms. Understood" (me) were emblazoned via sash across out orange sparkly, cut-off jumpsuits. We wore blackout lenses and black and white makeup. This not what a prisoner looks like. The costumes we wore last Saturday were both genderfucked and avant garde with the contrived political statement I'd hoped to achieve.

(Sidebar: the makeup was actually a mashup from a Lady Gaga makeup and the makeup from the Icelandic music video "Over" by Gusgus) 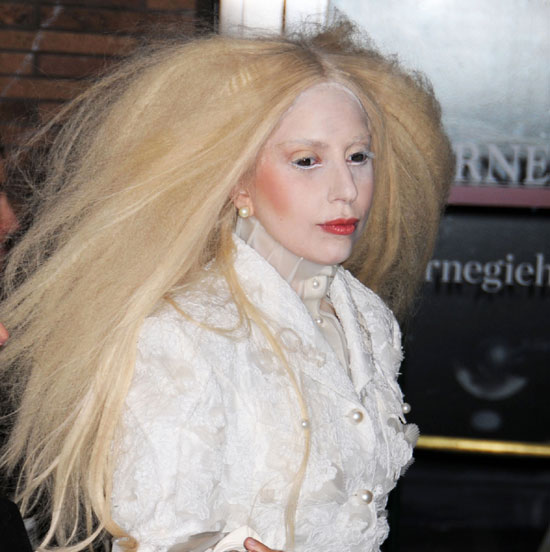 The event date was October 25th. It was not Halloween, and we did not wear Halloween costumes. It cheapens our work to call them Halloween costumes. (In fact, I plan to be a young Severus Snape and Courtney is being a parrot.) Admittedly, the party's proximity to Halloween did made the acquisition of supplies much easier, but we were the only ones dressed up.

Apparently, our outfits were offensive to a particular patron of the event. I post the following Facebook commentary below as not to misrepresent anyone: 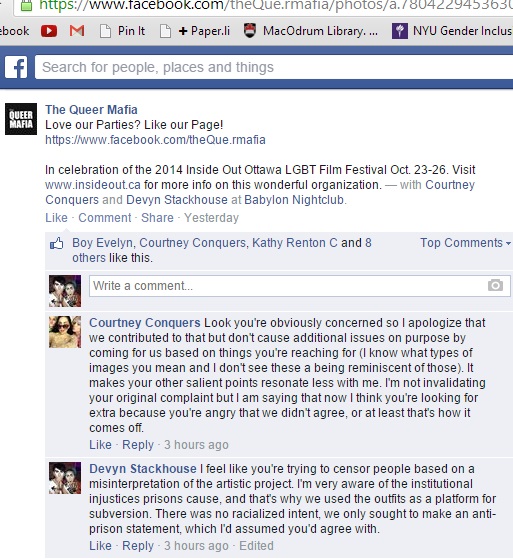 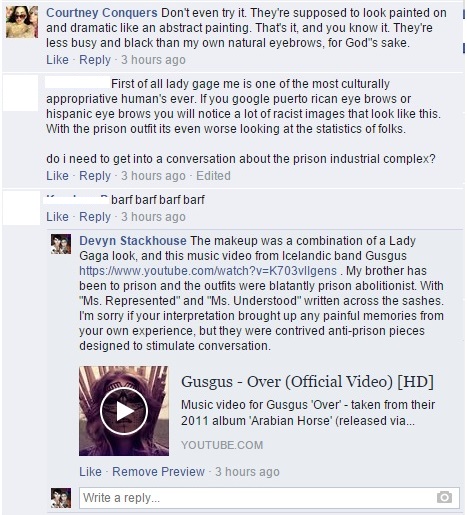 About an hour after this exchange, the owner of a feminist sex shop in Ottawa, who employs the patron who complained on the photo, posted this comment to the event page for a Halloween party the business is hosting this Friday.

Let'e be very clear; we did not do black face; no one's culture was appropriated, and we weren't making fun of prisoners. Saying that we shouldn't bring the struggles of prisoners into mainstream spaces is bad tactic for any self-proclaimed activist. In fact, discouraging people from taking up prisoner causes through creative means only further others prisoners as the unmentionable members of society. Should documentaries, novels, and TV shows never show a prison?

We didn't steal someone's story, or misrepresent someone's voice. We broke up the discourse. I believe in fierce self-representation, and I just wanted to share the whole thought process of our craft and performance, so that if I need be judged, I may be judged upon my own words.

So now, I'll let you see the costumes: 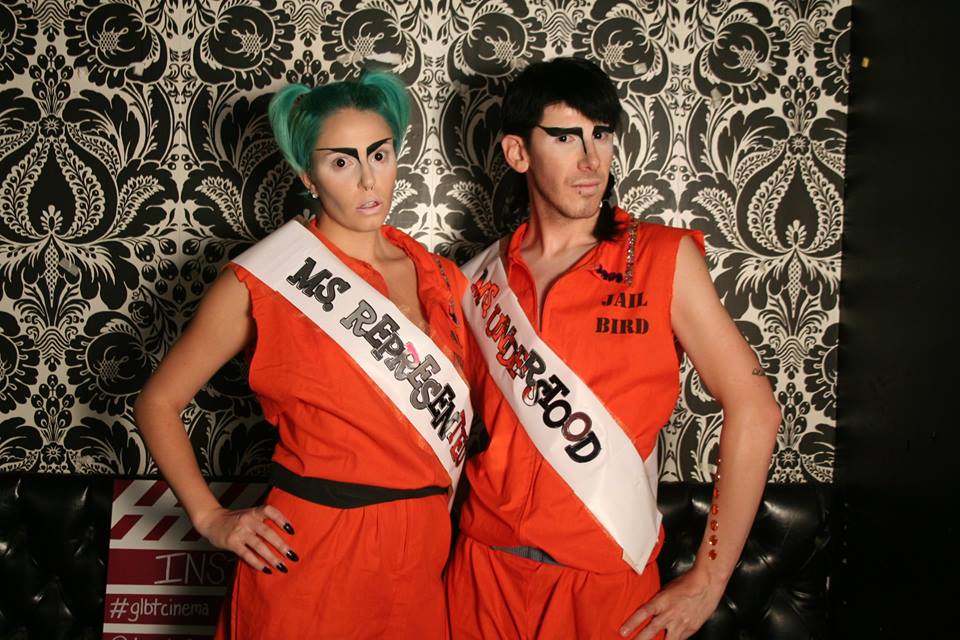 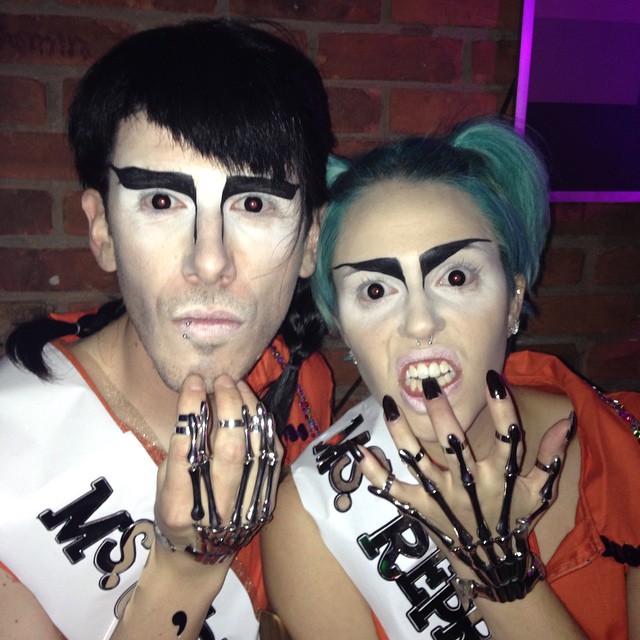 And this one is really blurry but it shows the short legs. 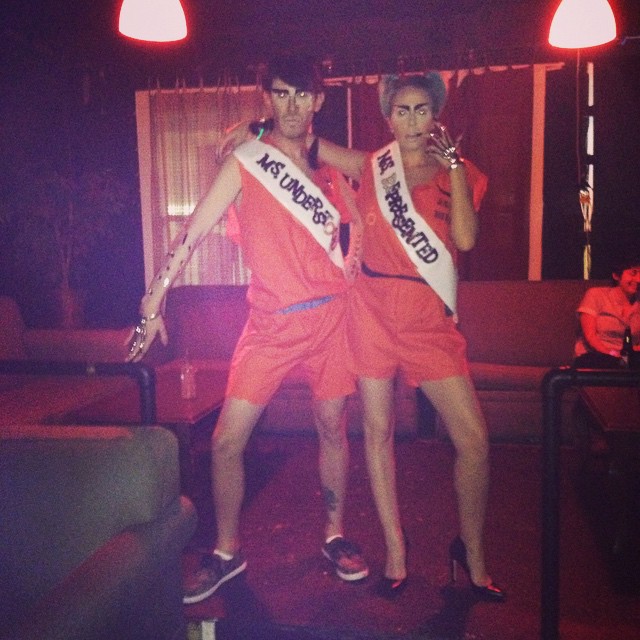