May 07, 2013
Yesterday, I attended an Evolving Topics in Reproductive Justice panel and lunch hosted by the University of Ottawa Shirley E. Greenberg Chair for Women and the Legal Profession and Canadians for Choice. It got me to thinking that, with Thursday's March for Life quickly approaching, I should probably turn my little corner of the internet toward a serious topic in reproductive justice. Thus, I write my case of how feminist language has been flagrantly misused to support causes calling for an end to sex-selective abortion.


The theme of this year’s shamelessly anti-choice March for Life is: 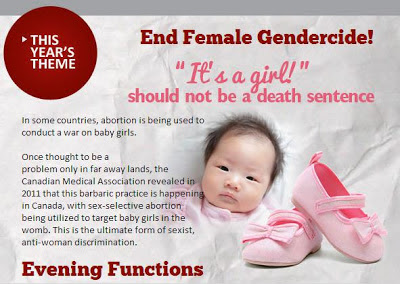 The March for Life and their righteous concern for female gendercide couldn't be further from “the feminist agenda”. Point one: the creators of the campaign entirely conflate sex and gender (Sex is the biological body we’re born into, and gender is the social identity we perform). The notion of fetal female gendercide uncritically pairs a cis sex-gender designation onto an unborn subject incapable of intelligible gender performance. Based on their pre-social definition, the unborn are only possibly subject to discrimination by biological understanding (sex); thus, gendercide in a fetal context is an impossibility, by definition.

An accurate tag line would read: “End Fetal Sexism” or "End Fetal Femicide" (if you like alliteration), but neither option sounds enough like genocide, the pre-eminent theme anti-choice groups invoke to shame abortion seekers. We should also be critical of how the March for Life's approach serves to ignore and erase the possibility of children that will grow up to self-identify as trans or gender variant.

What’s mortifying about this particular theme is that sex-selective abortion is gender policing's most extreme iteration. Inflexible expectations about the specific performance of binary gender place carrying some pregnancies to term outside the realm of possibility for some child bearers. Motivated by the economic rationale that a girl couldn't possibly meet the social or economic value of a boy, gender discourse is reshaping demographics in China and India to reflect “missing women”. While sex-selective abortions aren't anywhere near statistical significance in Canada, their existence alone has conjured outrage.

Anyway you spin the rhetoric, it means the same thing; anti-choice advocates don’t want Canadian citizens making decisions over their own bodies. They think laws that would deprive child bearers the sex of their unborn, information about their own bodies, and tougher access to abortion will help Canada resist heathen ways.

Why is it that controlling reproduction and limiting individual freedom are the response to the injustices that created the reality of sex-selective abortion? We should be asking: why do we permit poverty, patriarchy, and cis-hetero-normativity to coalesce in this way that (re)produces injustice?

The Bible doesn't say anything about sex-selective abortion, but it’s pretty clear about poverty. 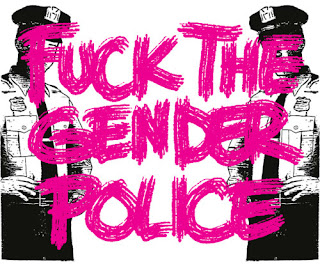