December 01, 2013
Today, I'm blogging in response the "I Need Feminism Because..." campaign a small group ran two weeks ago in the Carleton University Centre Atrium. Participants were asked to complete the sentence on a white board and pose for a picture. This post isn't about the campaign; it's actually about two instances where I saw Carleton's real need for a shot of feminism shortly after participating in the campaign.


Firstly, my classmate (@EvelynIsABoy) and I finally heard back from our EMCP (Enrichment Mini Course Program) proposals. EMCP is a week-long university-lite course designed for students between grades 8 and 11. Instruction is paid, and the application process is open to professors and graduate students. We decided to generate two proposals together and share the instructing duties if only one was selected.

The proposals we submitted were for a course on political literacy and activism (The Revolution Will be Tweeted) as well as a feminist take on sex ed and healthy relationships (Advanced Sex Ed). The latter was refused. The organizers were understanding of our purposes, but were cautious to present an option with mature content because of parent reaction to film (we don't know which) shown the previous year. We received the suggestion that we re-submit the proposal the upcoming year in a health framing.

I'm just angry that no one seems to want to give youth any straight talk about sex and gender. The sex ed curriculum is years behind the times, and the Ontario Miss G Project's efforts to get a high school women's and gender studies course have only manifested as an elective thus far. We are failing to prepare youth for the complicated sexualized and gendered realities of Canadians.

My second observation of Carleton's continued need for feminism happened yesterday at exam proctor training. After being explained the (painfully cis-sexist) bathroom sign-out policies, I raised my hand and asked what the protocol was if a student requested a gender neutral bathroom break. The response I got was: "It hasn't come up, yet." and the promise of a follow-up. I find it really hard to believe that a since Carleton started (1942) not a single gender non-conforming student has had to use the washroom during an exam; anyhow, I await the email with the official policy.


That there feminism, she's still kicking. 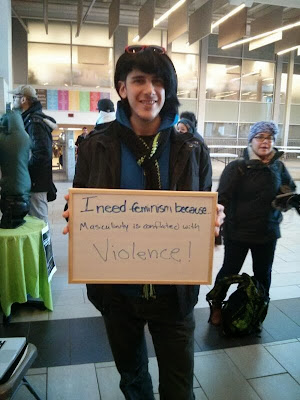