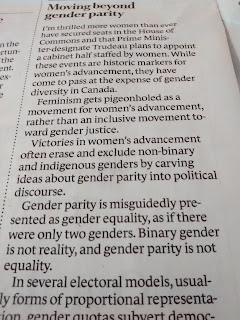 I'm thrilled more women than ever have secured seats in the House of Commons and that Prime Minister-designate Trudeau plans to appoint a cabinet half staffed by women. While these events are historic markers for women's advancement, they have come to pass at the expense of gender diversity in Canada.

Feminism gets pigeonholed as a movement for women's advancement, rather than an inclusive movement toward gender justice.

Gender parity is misguidedly presented as gender equality, as if there were only two genders. Binary gender is not reality, and gender parity is not equality.

In several electoral models, usually forms of proportional representation, gender quotas subvert democracy so that the result of an election is more ideologically palatable to those in power.

Politicians are elected for their experience, ideas, personalities, talents, and community roots. Gender quotas ignore the real political work that needs to be done removing barriers from participation in formal politics and substitute women's advancement  for gender justice.