Thank you for your email of November 30, 2015, in which you suggest ways to identify non-binary and indigenous genders in the Census of Population questionnaires to reflect the diversity of gender in Canada.

After extensive consultations, the questions for the 2016 Census Program have been finalized and the questionnaires are printed. Information regarding the gender/sex of the respondent will be collected according to two categories: male and female. We encourage transgender people to indicate the gender/sex (either male or female) with which they most identify. However, I understand that as a non-binary transgender individual, you cannot accurately select one category or the other.

I would therefore recommend that when completing your census questionnaire, you leave this question blank and indicate in the comments section at the end of the questionnaire the reasons for which you find the current construction of the question inadequate. That will provide valuable and accurate information for this segment of the population.

For the 2021 Census of Population Program, Statistics Canada will again be conducting public consultations and testing of the gender/sex question. This will afford us the opportunity to gather information on our users and uses of Census data and evaluate if there are new ways to collect data on gender/sex for respondents who do not identify themselves with the current response options.

Thank you again for writing to express your ideas and concerns. 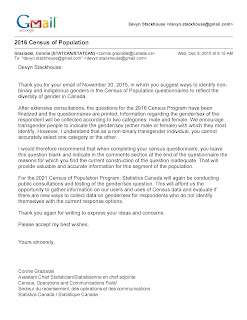 Thank you for your response. I am, however, greatly disappointed that I will yet again be forced to lie or omit my gender on the census.

As a academic and queer community member, I assure you if your "extensive" consultation was adequate the problems of measuring gender as a binary would have been raised. Reasonably, you would have consulted a leading organization on gender diversity (perhaps the Canadian Centre for Gender and Sexual Diversity) about measuring gender in a non-binary way.

I hope you understand that I can't be happy with "you might count in 2021". The lack of concern for gender diversity in the census represents an administration of exclusion in a country that aspires to pluralism.

Please learn from and fix this failure.

PS: You misidentified my gender in your email as "transgender non-binary". This is incorrect. I do not identify as trans; I am not transitioning. I'm just non-binary.


If a person gender self-identifies in their communication with you, you are expected, as a senior public servant, to respect and accommodate them.

Gender training is something that may benefit you and your co-workers substantially. 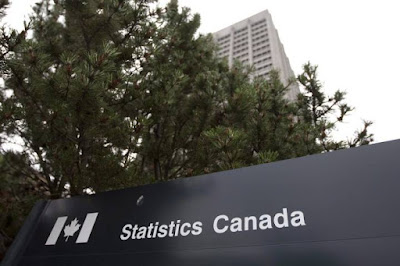