This letter is probably one of thousands of emails you've received following this year's pride parade, but I assume no one else is raising this issue. 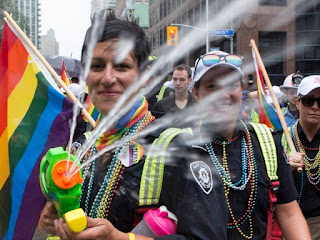 Your parade needs guidelines for the use of water guns. I'm not calling for an all-out ban on squirt guns, many patrons and marchers revel in the cool down, but there needs to be a governing common sense policy that all marchers agree to in writing. Maybe we avoid babies, people with electronics, people in full makeup, people who clearly present as ascribing to religious or cultural modesty, and those who ask not to be squirted.

Three of four of us were wearing extensive makeup. We did so as an act of pride, protest, and artistry. If you want the crowd to add to the vibrancy of the entire experience of the parade, you have to respect that not everyone wants to get soaked, and front row is not a substitute for consent. I had a full (glorious) splitterbeard (split+glitterbeard - yes I invented this word) and glitter paper letters spelling "T(he)y" - my preferred written pronoun- glued to my chest, and two of three of my company were in full drag. We wanted our faces to last - go figure they each took a minimum of 30 minutes and multiple craft and cosmetic products to create. 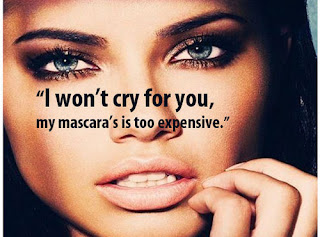 We adapted to the water gun reality of the parade and got good at ducking and covering when the marchers with water guns approached. This strategy was effective until the Metrolinx contingent. One of their marchers recognized we were avoiding water and intentionally sought to shoot us. My friend yelled that we were in full makeup and asked him to stop.

His response was the grossest white dude privileged thing I've seen in a while. He said "then why are you in the front row?" and shot her in the face with a generous blast of water. How the fuck is that an appropriate response to asking not to be harassed? When anyone says "respect my bodily integrity", questioning it then vindictively violating it is beyond offensive. This tendency to question and ignore demands for bodily integrity is the foundation of rape culture, and it has no place in Toronto's pride parade.

So add me to the choir asking for a little more respect out of the Toronto Pride Committee.