Like if a friend had 30 seconds to brief a mutual about me, the Green Party would probably come up. It is with utmost fury and disappointment, I write to sever this description.

My partisanship has always been critical, always been strategic. For the first time in my adult life, I am not supporting a Green Party provincially. The Green Party of New Brunswick is only occasionally, and not categorically, better than the Liberals and New Democrats of the province. There are absolutely great candidates running for the Greens, but I no longer offer a blanket wish of success to the party. 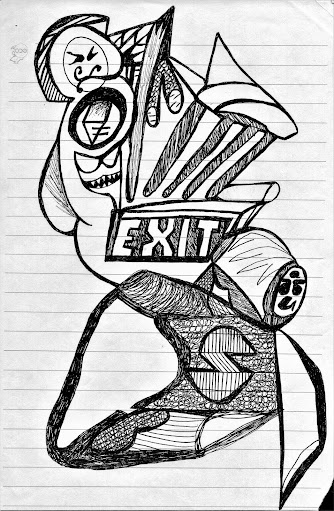 I'm not impressed with David Coon's leadership. I'm not a member anymore; I can say it. The world has evolved more quickly than he has since being elected. Credit where due, respect for the path he led, but in 2020, the party would have been better served with Megan Mitton or Kevin Arseneau leading them into this election. Both are better public speakers and more demographically relevant.

David doesn't have the political courage and imagination I demand from a Green Leader. I'm supporting Dimitri Lascaris for federal party leader; I do not value the tactic of appealing centrists. Above all, I value impact and making change in the lived experience of struggling New Brunswickers, not abstract incrementalism.

Snap election platforms do not have to be costed. It doesn't make sense to waste this moment in political history - a moment of reflection ad realignment - to hold back a vision for a dramatically different province. It's not a time for small dreams.

David Coon sold out progressives by refusing to consider cooperating with the NB NDP.

David Coon sold out progressives when he proposed a band-aid transit stop-gap: redirect the carbon tax dollars to the cities for transit. We need a bold new province-wide fee-free transit network. 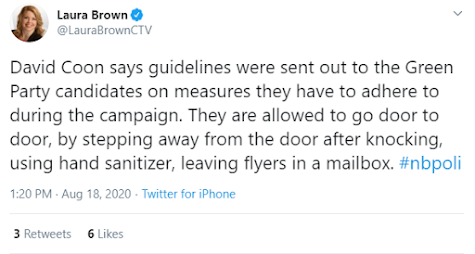 David Coon bragged about the party's slate of diverse candidates after presiding over the improper denial of my application for nomination for "lack of campaign infrastructure". I was among a few candidates in the province running to be our first nonbinary MLA, and I was denied the right to stand before a nomination meeting for disbelief.

Transition to the personal axe I have to grind:

Since the beginning of August I started putting together a plan. A plan of how to campaign during covid and a plan of how to fix the problems in Sussex relevant to the jurisdiction and capacity of an opposition MLA. My 27-point plan: The Next Great Chapter for Sussex-FSM and arts-based outreach strategy never got to be presented to the members of the RDA because the Green Party of New Brunswick provincial council preferred another candidate. 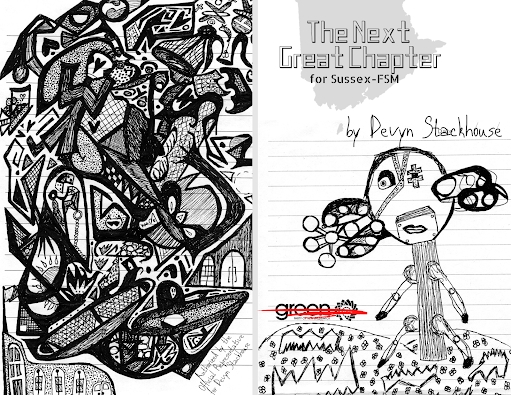 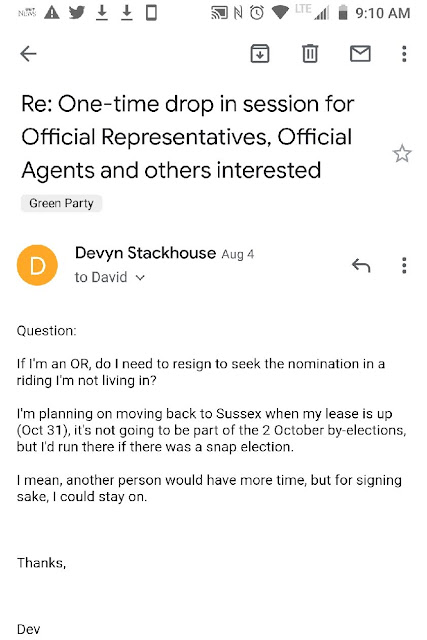 Sunday, August 16: I resign as OR of Saint John Harbour RDA. 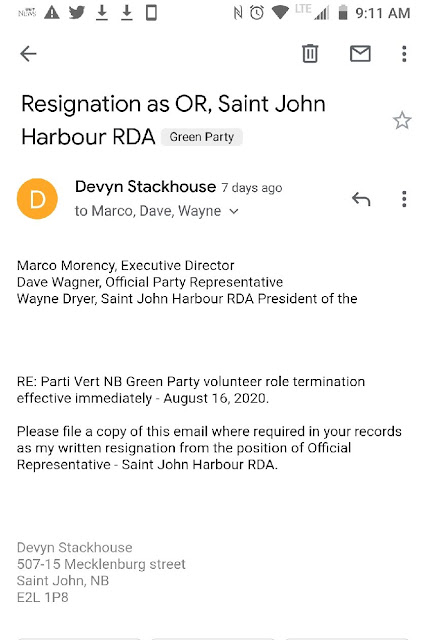 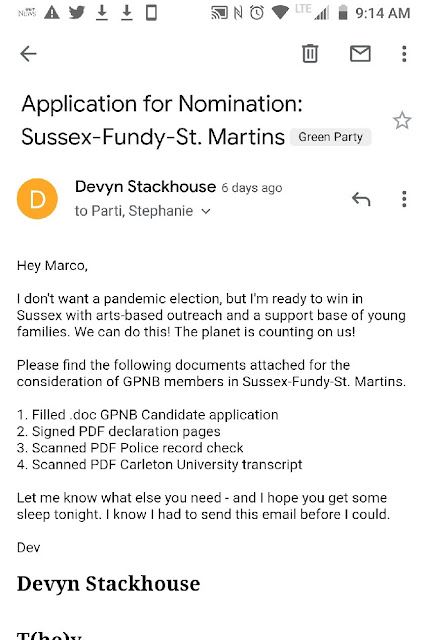 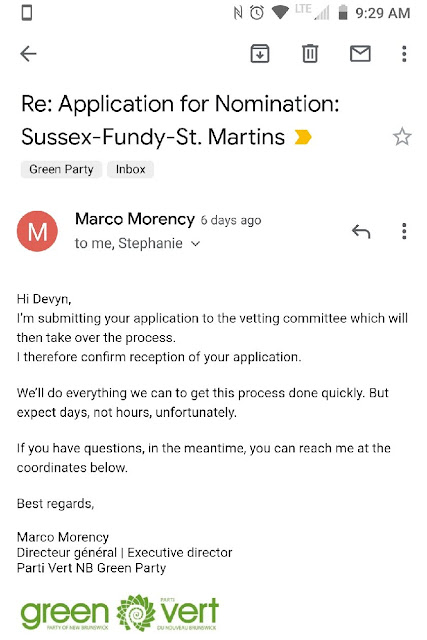 I receive 3 calls from an unknown Calgary number that later identifies at Tim Thompson who communicates that he is also seeking the nomination and would prefer I apply to run in his hometown of Quispamsis or Albert. I respectfully decline. 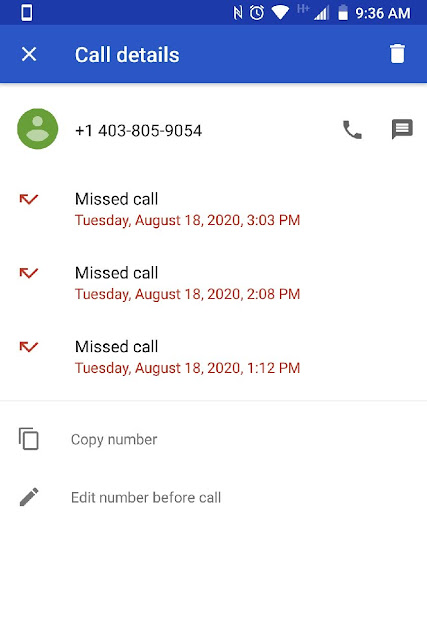 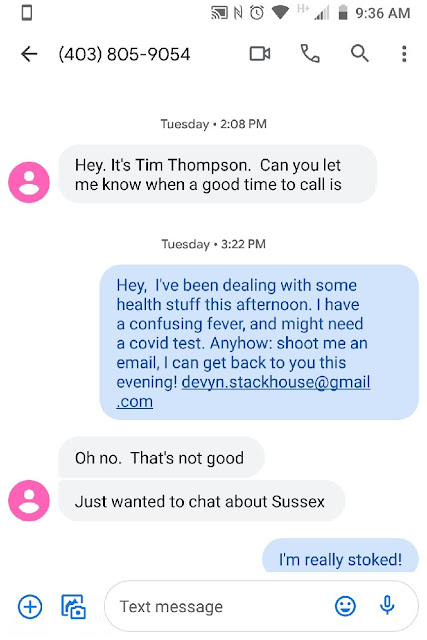 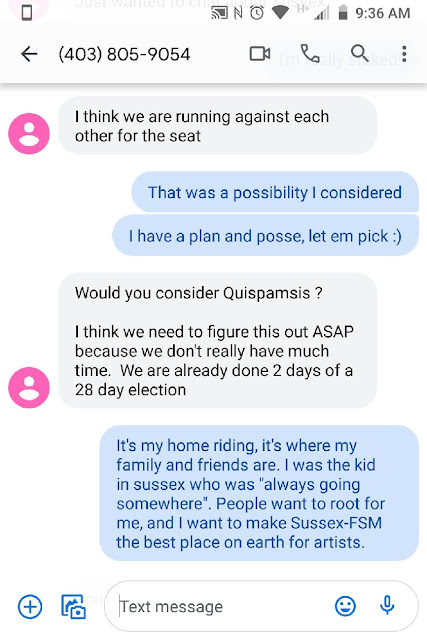 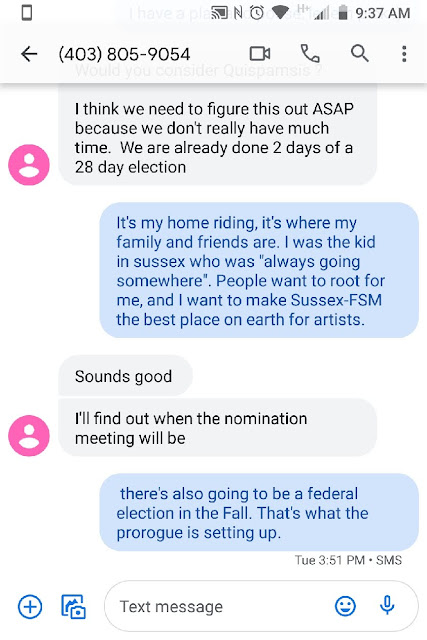 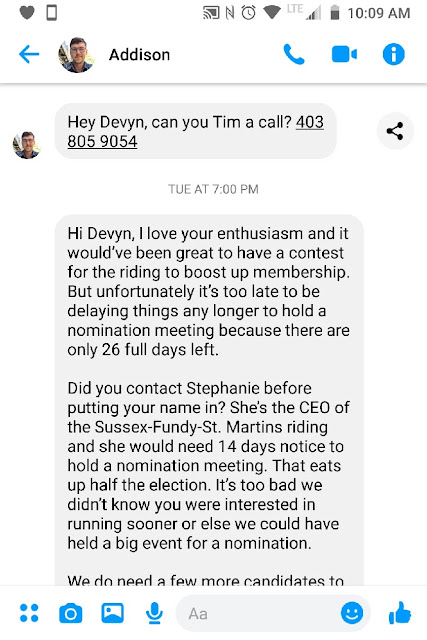 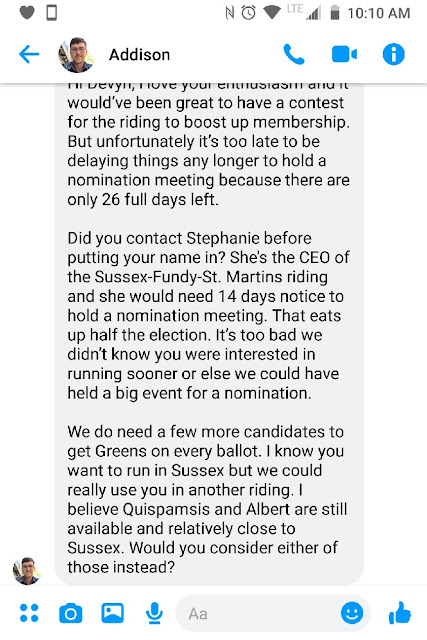 7:42 I receive email to schedule vetting interview via zoom for 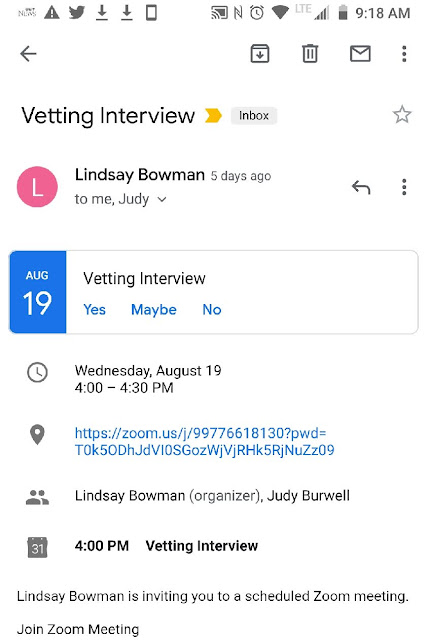 Wednesday, August 19: vetted at 4pm - proceeds cordially. Worth noting - it was asked if would campaign door-to-door, and I said no and explained my choice of arts-based campaigning, which is out of step with the GPNB leadership's position.

~9 AM: I am contacted by phone by Stephanie Coburn to say my candidacy has been blocked by a perceived lack of "Infrastructure". I indicate I will be appealing the message she is communicating on behalf of the vetting committee. I request that the message be sent to me in writing. She complies. 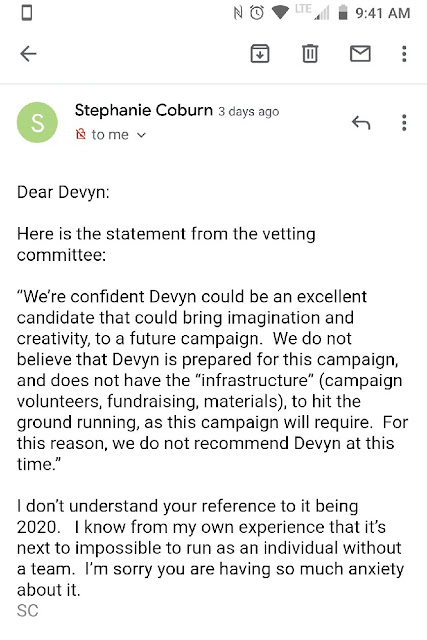 11:51 am I file an appeal for a nomination meeting citing a perceived lack of infrastructure to be inadequate grounds to violate a member's right to stand for nomination as per the party bylaws. 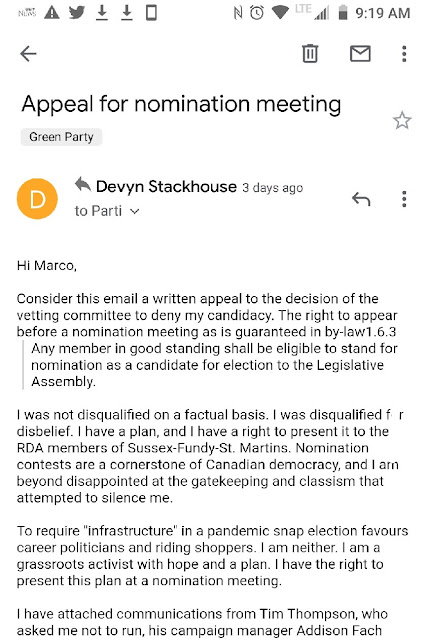 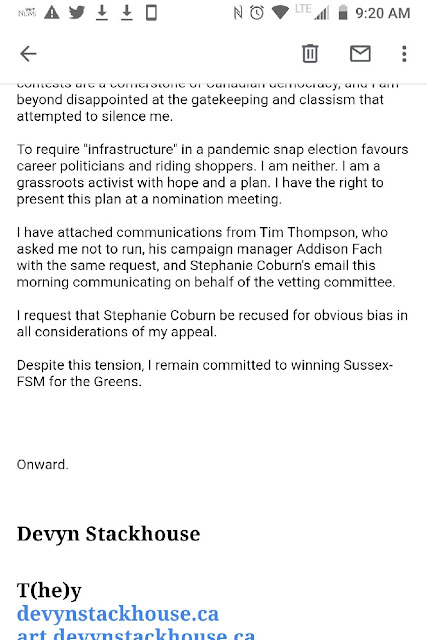 I hear no response, but the Sussex-Fundy-St. Martins Green RDA Facebook page posts that Tim Thompson has been selected as candidate. I respond that I have appealed and this post isn't the case.

I send an additional email to Marco Morency stating that my appeal has gone unheard. I CC Dave Wagner this time. 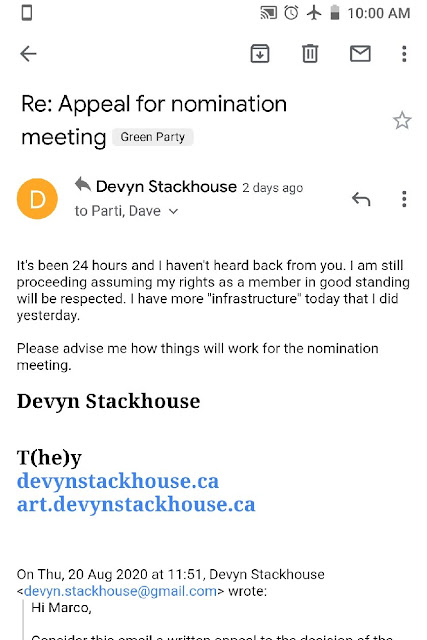 Friday night I am told to suspend campaigning and wait my turn by a coupe of cis white guys. I decline. 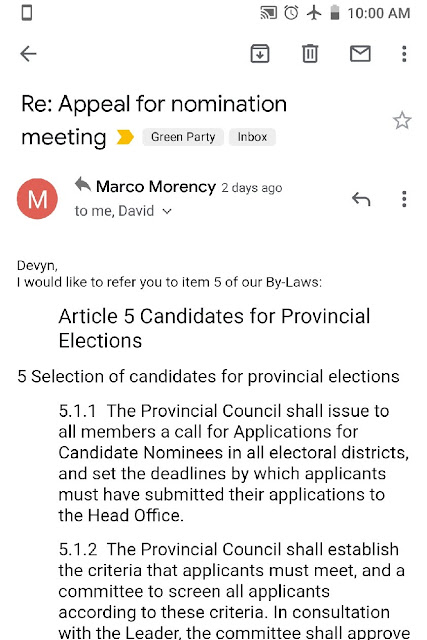 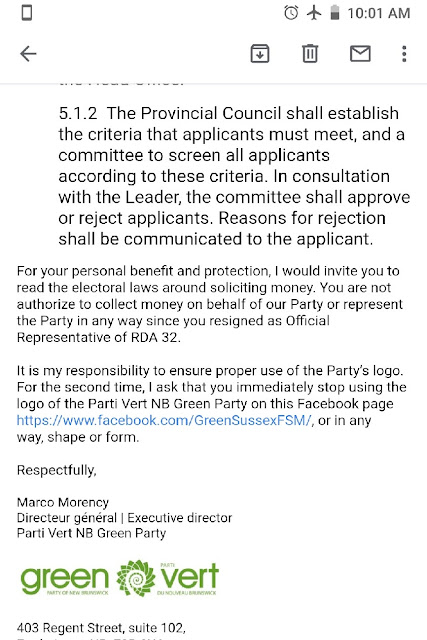 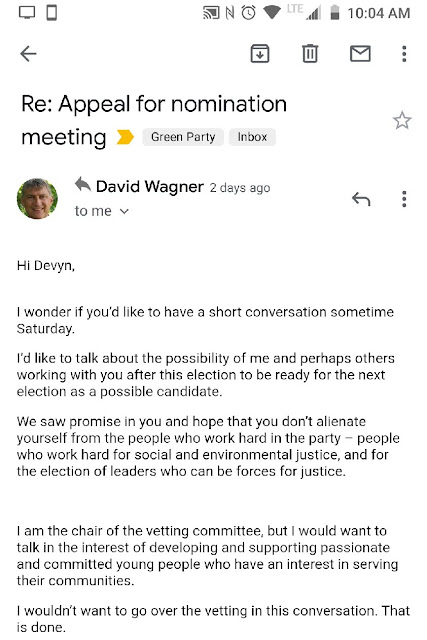 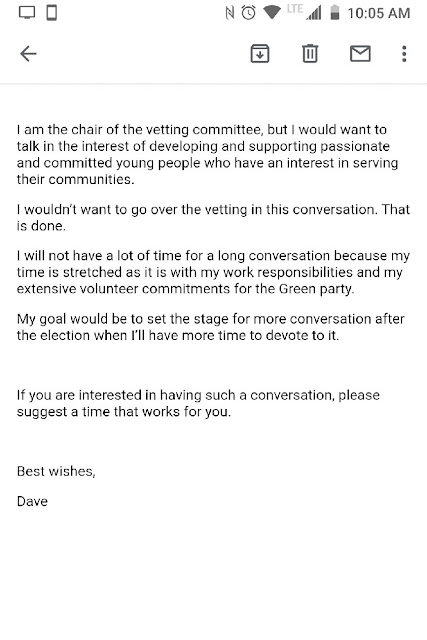 I slept on it. And Saturday, I was either going to file a complaint with Elections NB or leave the party and go pubic. You're reading how I decided to deal with it.

What snapped? I had to put the paper trail together whether I was going to Elections NB or going pubic. Doing so, I got so angry that the prize for all of this - the fight just to be heard and then to get elected -  meant I'd be winning with and for the very assholes who asked me to compromise my values for their convenience. The Green Party of New Brunswick does not offer change I can believe in.

I do not support the Green nominee in Sussex-FSM. The dude is an opportunist. He ran in Fundy Royal after losing the Fredericton nomination to Jenica Atwin and saw Bruce Northrup's retirement as a sweet deal. A good politician who respected the core Green principle of participatory democracy would have welcomed the critical exchange of ideas on how to best campaign and govern and insisted on a nomination meeting.

Further, I am assuming the Thompson campaign is choosing door-to-door outreach. I cannot recommend against the choice to campaign door-to-door enough.

After much consideration, I will not be seeking an independent nomination. The strategy I had to win -- that I never got to present -- depended on the riding association for sign distribution. I'm not sure in what capacity, but I am passionate about the potential of arts-based campaigning; don't be surprised to see some in the future.

So who am I supporting?
As impossible as it is, I implore voters to tune out the provincial narrative and drill down on what their MLA candidates will insist on in a legislative capacity. Ask questions; get commitments. I know it's impossible in a tiny province with a minority government, but it will be worth it. Vote for people who share your policy agenda and have the personal capacity to enact that reality.
Saint John Harbour is a battleground riding that nominated a Green I was never a fan of. In a fairness, Brent Harris did not get a kind welcome to Twitter, and he has a lot of good ideas and passion for results. He and I just aren't building the world at the same speed or on the same channel.
I am not yet endorsing a candidate in Sussex-FSM, but I will be. I'd like to learn more about the NDP and Liberal candidates. I am not supporting the PANB, PCNB, or Green candidates.
Locally, I'm splitting my support across 3 parties, supporting Green Joanna Killen in Saint John-Lancaster and NDP Cait Grogan running against Blaine Higgs in Quispamsis. I don't feel compelled to speak to other candidacies yet. When that changes, you'll know.
Onward. 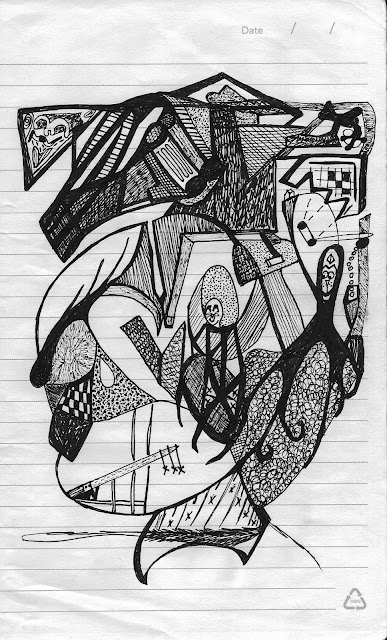