For my third Advent Policy Brief, I imagine how limiting the terms of Senators to match the terms of MPs in the House of Commons could lead to much better governance.

In this model, the Senate becomes explicitly partisan, chosen by the governing Prime Minster. Senators are symbolic representatives of their provinces who face no electorate and already openly engage in partisanship. Why shouldn't the Senate be filled with 105 of the current Prime Minister's friends?

With their attention undivided by constituency work and reelection, Senators are ideal candidates to fill Cabinet roles. It is only a practice, not a law, that Ministers are appointed from the governing party's caucus of MPs.

There are few American political traditions I think Canada should import, but highest among them is their unelected cabinet. Holding two positions within the government causes inevitable conflicts of interest; just ask Jody Wilson-Raybould.

At confederation, Minsters were regional sentinels whose personalities physically anchored the geographic project of nation building. Their double duties were justified by small government ideology and reasonable paranoia about power sharing, but the country shrank with each revolution in mass communications: print, radio, TV, home computing, and the Zoom boom.
The enduring justification of MPs being appointed to Cabinet is that a Minister without parliamentary privilege could be subject of subpoena orders in litigation or criminal prosecution against the government. Parliamentary privilege also protects Minster whistle-blowers for disclosures that would violate the mandate of Cabinet confidentiality - disputably - JWR pointed out that it's unclear if invoking privilege to violate confidence would have implications for Law Society membership. 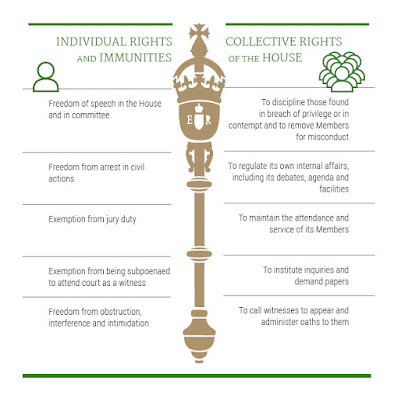 Senators also enjoy parliamentary privilege.
Pulling Cabinet from the governing party's bench of MPs has a negative effect on the culture of Parliament Hill. Foremost, it maintains a fictional hierarchy. Yes, ministers get a raise, but they are beholden to the House of Commons. Selecting the Cabinet from MPs situates it "of the caucus and above the caucus".  Relegating the majority of MPs to the back bench creates incentive for MPs to climb socially within their respective parties and focus on reelection rather than working across party lines to pass legislation.
If MPs stopped trying climb their way into Cabinet, the evaluation of "how good" an MP is would centre on their capacity as a legislator and not "delivering results to their riding". That narrative misrepresents the division between the MP caucus and the government. It's not an MPs job to "deliver for their riding" and appointing Cabinet from MPs advances that false narrative.
The required connection between a Senator Cabinet and the House of Commons is obvious. The front bench of the governing caucus would be MPs appointed as parliamentary secretaries to the Minister-Senators.
Parking the executive branch of the federal government in the Senate is a direct way to make the institution something more meaningful. Until this proposition precipitated from my musings, I was all for Senate abolition. I saw it as an expensive exercise in patronage and partisanship justified by scant duties to 'oversee and guide'.
But if we can suck a big glob of partisanship out of the House of Commons and stuff it in the Senate where it won't bother anyone, fuckin' eh.